Is that plastic cup really getting recycled?

“The perception that plastic is easily recyclable — and that the burden of recycling lies solely with the consumer — has been shaped by decades of carefully constructed campaigns paid for by many of the most prevalent producers of plastic.” –Christopher Marquis for Forbes Magazine.

It was Earth Day 1971 when a compelling public service announcement calling for environmental stewardship and featuring a grim Native American gentleman decked out in full buck-skinned splendor took to the airwaves.

The minute-long advertisement, produced by a group calling themselves Keep America Beautiful (KAB), depicted an indigenous man slowly paddling down a pristine river at sunrise in his canoe while thunderous drumming sounded in the background. Suddenly, pieces of litter debris float by the canoe. Next, the camera pans out to what looks like an industrial shipping area, with smokestack plumes billowing in the distance. The man then brings his canoe to the shore, where even more trash resides on the ground, and begins walking. Finally, he makes his way to the side of a highway where a car zooms by him, but not before carelessly tossing a small bag of to-go food trash that explodes right at our protagonist’s feet. The camera then zooms in for a close-up as a single teardrop runs down his deeply disappointed, not Native American face (the actor was actually Italian). Finally, as the metaphorically ironic fake tear falls, a narrator dramatically states:

As a child growing up in the ’70s, this iconic PSA (public service announcement) hit me hard. Between “The Crying Indian” (as the ad became known by) and Woodsy Owl reminding me to “give a hoot, don’t pollute,” I was well schooled on the many evils of littering and never wasted an opportunity to call out the litterbugs around me, adults and children alike.

But there was more behind the crying Indian than met the eye.

With aid from The Ad Council, Keep America Beautiful, comprised of the American Can Company and the Owens-Illinois Glass Company (eventual parent company of the Dixie Cup Company), devised a profoundly emotive and highly successful public relations campaign.

Their objective? To shift the focus of litter and its disposal away from the manufacturers and onto the consumers and municipalities. Already there were whispers of the passage of new laws to address the voluminous waste created by throwaway containers and the recent proliferation of single-use plastics. However, the bottle (and packaging) companies were adamantly against any laws requiring them to sell their drinks in reusable bottles, as it would cost them more than throwaways.

Though the PSA did focus on the detriments of litter and pollution and helped establish a much-needed shift in attitudes of the time around littering, it also subtly imprinted the idea in the minds of Americans that litter was a human behavior problem, and that it was solely the responsibility of the consumers to handle the disposal of these throwaway bottles and containers; not the responsibility of the companies producing them. Additionally, the companies behind the KAB veneer argued that consumers preferred the easy convenience of throwaways over the hassle of reusables.

Today, that shift of burden over to consumers is alive and well. Recycling has become just one more tool for plastic packaging producers to put the onus of disposal on us. And while recycling works adequately for some materials, such as aluminum, glass, and paper, the landscape changes drastically when it comes to recycling plastics.

The Sad State of Plastics Recycling

” Plastics recycling is like placing a band-aid on gangrene.”

To be honest, before 2018, I did not think much about what happened to my plastics after pick-up from my blue recycling bin. I had no idea our plastic waste got shipped to China for “recycling.” My thoughts around it were akin to the stories some of us were told as children about what happened to our family pet that was suddenly no longer around. “Baxter has gone to live at a farm out in the country, where he’s free to roam and live a happy, fulfilling doggy life.” Similarly, I assumed my plastic was living its best, most sustainable life by going straight to a recycling plant where it would magically continue living out its reuse and recycle circular journey indefinitely.

Before “National Sword”- the name given to China’s 2018 policy restricting the import of foreign recyclables, around 70 percent of America’s plastics were sold and shipped to Chinese processors, where the high-grade plastics could then be broken down and repurposed by plastic manufacturers. But because of excessive contamination issues and immense amounts of low-quality plastics that are not really recyclable, China put its far-reaching ban on the plastics it would accept. As a result, after the 2018 ban, the U.S. began shipping nearly half its plastic waste to other countries in the Global South, such as Thailand, Malaysia, and Vietnam. In 2019, Africa saw a fourfold increase in plastic waste imports after China’s ban went into effect. Without the proper infrastructure to handle the immense volume of imported plastic waste, many of these countries have become quickly overwhelmed.

Ultimately, the destiny of these plastics shipped overseas was (and still is) virtually unknown: which plastics are recycled and which are landfilled, incinerated, or littered are not part of the equation when determining America’s recycling rates. Instead, if it’s shipped overseas, it is counted as “recycled,” regardless of its ultimate fate.

Additionally, as we assess the reality of plastics recycling, we must recognize the fact that not all plastics are created equal.

The numbers on plastics represent their resin identification code which identifies the type of plastic the product is made from. But this can be misleading, as many plastic chemicals and resins are combined to make proprietary blends of plastic that have different chemical and temperature properties which makes it almost impossible to separate for recycling purposes.

Of all our numbered plastics, numbers 1 and 2, PET and HDPE are considered the easiest plastics to recycle. But even recycling these two kinds of plastics can be misleading.

Each time, for example, a plastic water or soda bottle is recycled (a #1 PET), the heating process necessary for recycling the plastic decreases the structural quality of these bottles until it can no longer be recycled. This equates to just two or three recycling cycles. When these plastics can no longer be recycled, some may be “downcycled” into products such as patio furniture,carpeting, fleece jackets and other clothing items that eventually end up in our landfills as well.

I used to think clothes made out of plastics was a great solution until we discovered that when washed these clothing fabrics, such as nylon, polyester and rayon, release microplastics. (Plus, plastics are made from fossil fuels, which contribute greatly to climate change-more on that later).

Getting back to plastic’s complicated numbering system, the fact remains that some plastics may have the same resin code number but the products themselves are created differently, thus making it impossible to recycle them together despite having the same number. Take for example, the ubiquitous clamshell packaging container-those transparent, plastic containers with tops used in the produce section for holding an array of various fruits and vegetables.

FIgure 2: Common clamshell containers. Are these containers actually getting recycled? Acceptance at your local recycling center is no guarantee.

The resin code emblazoned on the bottom side of these clamshell produce containers are also PET #1; the same number you find on the “easier-to-recycle” water and soda bottles. The process for making these two plastics, however, is very different despite both being PET, making it difficult to recycle them together. In fact, many material recovery facilities (MRFs) will not even accept clamshell packaging.

So which plastics do MRFs accept?

In 2020, the non-profit organization, Greenpeace, conducted a comprehensive audit and report of findings on all 367 MRF’s in the United States in order to quantify which of these plastics are accepted (those MRFs that do accept certain plastics are not necessarily an assurance of recycling, as many plastic bales are sent overseas where recycling cannot be guaranteed).

Some of the key findings of this report include: 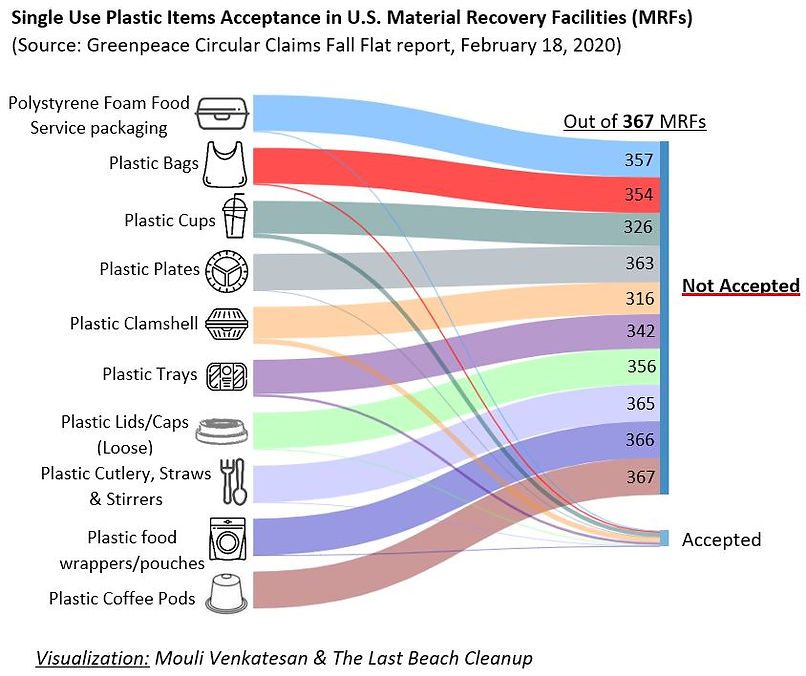 What must also be considered is that the market for low-quality plastic scraps, which comprises a majority of global consumer plastic, is currently bleak and must compete with cheaper virgin plastic. Acceptance by some MRFs does not guarantee that the plastic, particularly numbers 3-7, will even get recycled. Without a viable, competitive market, these plastics are sent overseas where their fate is questionable, though we do have a generally good idea of what happens next.

According to Our World in Data, of the 5.8 billion metric tons of plastic produced between 1950 to 2015, less than ten percent has been recycled.  And the latest numbers for recycling rates in the United States from 2021 are not much better.  A study conducted by the nonprofit, The Last Beach Cleanup, and the advocacy group Beyond Plastics found that in 2021, only five to six percent of the U.S.’s plastic waste was recycled.  The rest was landfilled, littered or incinerated.

So, despite what we’ve been told for decades about recycling by the industries (largely fossil fuel companies) that profit both directly and indirectly from producing more plastic, we now know that most plastics are NOT being  recycled. 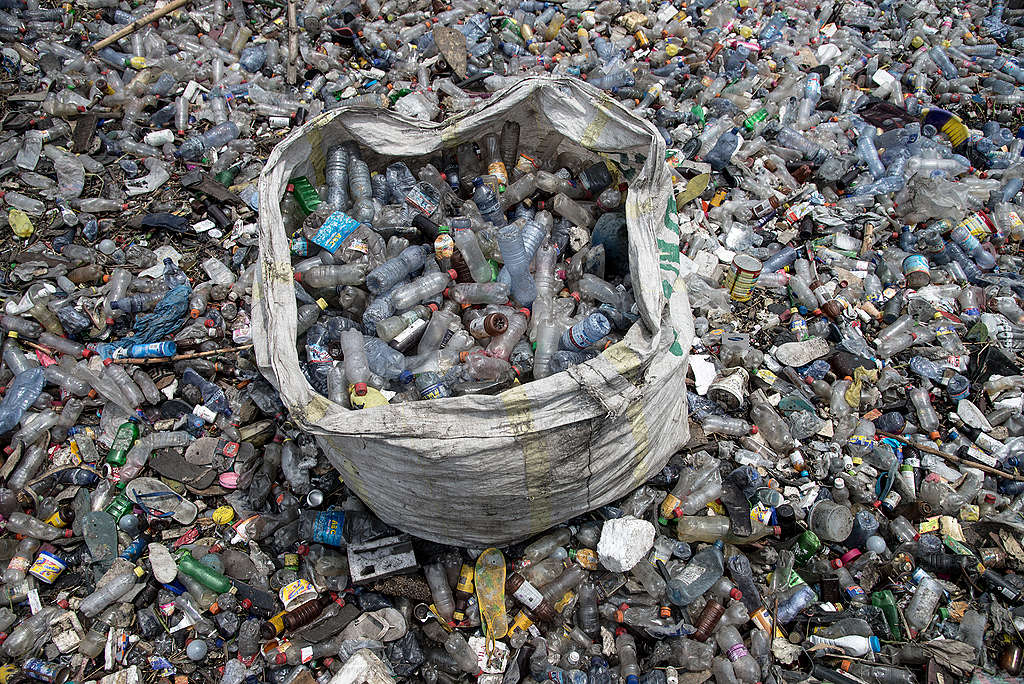 It’s not a stretch to say that “plastic is the new coal.”

Plastic creates greenhouse gases in practically every step of its life cycle. The production of cheap new virgin petroleum-based plastic is continuously pumped out annually. From 2000 to 2019, global plastics production doubled reaching 460 million metric tons and accounted for 3.4% of global greenhouse gas emissions.

According to one report, “plastic production releases about 1.89 tons of carbon dioxide per ton of virgin plastic produced.”

Additionally, another report stated that as of 2020, ” the U.S. plastics industry is responsible for at least 232 million tons of carbon dioxide emissions per year; this amount is equivalent to the average emissions from 116 average-sized (500-megawatt) coal-fired power plants.” As the production of new plastic increases, the already miniscule impact of plastics recycling will be diminished even further.

So, what can we do about it?

First and foremost, we must reduce our dependence on the use of throwaway, single-use plastics while concurrently holding companies accountable for the plastic pollution they generate. Just as industries are responsible for air and water pollution through regulatory laws, so must the plastic industry be held responsible.

It must be noted that although recycling is not currently a viable solution to our plastics waste crisis, innovations will continue to expand and improve upon the process. Many companies, such as TerraCycle, are researching and implementing solid solutions for hard-to-recycle plastic and other waste products, though the massive amounts of new plastic created each year and lack of recycling infrastructure makes this endeavor challenging.

Here are some additional ways to help combat the serious problem of plastic pollution:

And for those of you who are curious, here is the original Keep America Beautiful PSA featuring the “Crying Indian”.